Start a Wiki
The Wheels of Fury Pack is a DLC for Sleeping Dogs. Once you complete all of the DLC missions, the DZS-90 will be added in the garages throughout the city.

The Wheels of Fury Pack gives you control of the ultimate prototype supercar to tear up Hong Kong - the DZS-90. Uncover the story of Dr. Tang’s secret prototype across five all-new missions - each time adding incredible upgrades to the vehicle. When the missions are complete, you’ll have the fully-upgraded DZS-90 supercar available to use in free-roam and drive at will around the city.

The DZS-90 in its final form includes twin, concealed roof-mounted machine guns, 4-wheel steering, an electro-magnetic pulse, boosted speed and armor, plus new styling options to show it off. The DZS-90 may be loosely based off of the Lamborghini Veneno.

Dr. Tang, the eccentric inventor that Wei has helped several times in the past, is creating a new supercar for a rich Industrialist faction that wants to take control of the drug running business. The 18k has now found out about it and is planning to steal the car for themselves. Fortunately, at this stage, the vehicle is still not fully assembled so Wei has the chance to retrieve it before it is too late, knowing that if he has it, both the Sun On Yee and the Hong Kong Police will be happy.

Through five primary missions and several secondary activities, Wei must collect the different parts of the vehicle by following Tang's instructions and advice while taking on the 18k.

This add-on pack places players in control of a one-of-a-kind automobile in the streets of Hong Kong, causing chaos and destruction on its wake.

To start, Dr. Tang approaches Wei while he is having lunch and asks for his help to make sure he can keep his end of the deal with the Industrialists. As players progress through this task, the vehicle is upgraded with new weapons and abilities. Ultimately, the vehicle is unlocked in Wei’s parking garage and can be used throughout the main game for any activity where the player is allowed to bring their own car.

Wei soon finds out that the vehicle has access to the police scanner, so he can hear what is happening around the city. However, since the device is not fully proven, the scanner sometimes fails to tune into the police frequencies and instead tunes into private citizens' phone conversations, where Wei might just get to hear some unexpected situations while on a long drive. 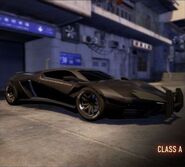 DZS-90 with no upgrades

Add a photo to this gallery
Upgrades

Add a photo to this gallery
Retrieved from "https://sleepingdogs.fandom.com/wiki/Wheels_of_Fury_Pack?oldid=30749"
Community content is available under CC-BY-SA unless otherwise noted.