"You're a cop. I am an undercover cop. The rules are different."
―Wei Shen to Raymond Mak

Wei Shen is the protagonist of Sleeping Dogs. He is a Chinese undercover SDU officer who is tasked with going undercover for the Hong Kong Police to infiltrate the Triads. Wei is a very talented martial artist, marksman and driver. He is voiced by Will Yun Lee and played by Brian Ho in the official live-action trailer.

Shen was born in Hong Kong to Margaret Shen and his father who abandoned his family. Wei had an older sister named Mimi.Wei growed up in old prosperity with his best friend jackie ma, winston and dog eyes, sam lin was mimi shen's boyfriend, being dog eyes girlfriend mimi shen became addicted to drugs and turned into a prostitute. one day wei stabbed dogeyes with a pen.Shen moved to San Francisco from Hong Kong at age of 10 with his mother and sister in an attempt to help Mimi overcome her drug addiction.

He attended PS 121 High School, and graduated in 2002 with honors. He then enrolled at San Francisco State University in September 2002, majoring in politics. He voluntarily departed SF State in 2004 to pursue other career options.

He applied to SFPD on June 1, 2006 and graduated at the top of the 2007 police academy class. While in San Francisco he had no criminal record or known criminal associates. Wei also tested negative on all drug tests. Despite a clean record he was reprimanded six times for violent behavior and fighting, but due to his intelligence, physical skill, and a natural aptitude for police work, he was still thought of highly by his superiors. Shen demonstrated a familiarity with the Asian gang structure and culture in San Francisco, and a deep understanding of the way in which these criminal organizations operate. Due to the department’s lack of qualified Asian-American candidates and the demand for Cantonese-speaking officers, he was highly recommended to be assigned immediately to the plainclothes anti-Tong task force.

Eventually, Shen's sister died from a drug overdose and later their mother committed suicide as a result. During his undercover assignment for the SFPD, Shen participated in gunning down Charles 'Two Hat' Chin and later tortured and executed drug dealer Ming Ming Trin on June 2010 for supplying Mimi with a fatal dose of heroin. Although a confidential informant tipped off SFPD Internal Affairs about the murder, it was not thoroughly investigated due to lack of substantial evidence. Furthermore, Shen's case officer, Lieutenant Franklin Jakes, provided Shen with an alibi. The case remained open, however, it was widely believed that Shen did commit the murder and infiltrated the gang as revenge for his sister.

Shen's vengeance against Trin caught the eye of Superintendent Thomas Pendrew, who had been searching for candidates in order to infiltrate the Sun On Yee. Against Raymond Mak's advice, Pendrew recruited Shen for the undercover operation in Hong Kong.

Shen’s first mission to establish his cover in Hong Kong was to take part in a drug deal with Naz. After being arrested during a police bust, Shen was re-introduced to an old friend, Jackie Ma, who promised to introduce him to Winston Chu's gang, the Water Street Gang. This allowed Shen to infiltrate the Sun On Yee triad. Under orders from Superintendent Pendrew, Shen's assignment was to go undercover into the Sun On Yee Triad and bring down the leader, the Dragon Head, and the lieutenants, the Red Poles, while reporting directly to his handler, Raymond Mak.

Shen began by beating thugs of a rival Sun On Yee gang, the Jade Gang, led by Dogeyes Lin, effectively aiding Winston's extortion and protection rackets in the Night Market. Shen was soon arrested again and interrogated by Inspector Jane Teng, however, Pendrew intervened, revealing Shen’s status to Teng as an undercover cop in order to obtain his release.

Shen continued working as muscle for Winston while also aiding Teng in several police cases, such as busting a notorious drug dealer, a murderous street racer, a serial murderer and solving a series of kidnappings. As the rivalry between Winston and Dogeyes came to a head, Shen and several other Water Street gang members raided and torched one of Dogeyes's drug warehouses and successfully kidnapped Siu Wah as leverage to gain favour with Uncle Po in the dispute with Dogeyes.

Having finally earned Winston’s trust and respect, Shen was accepted by Winston as a member of the family and was invited to his wedding with Peggy Li. After Winston and Peggy were murdered at their own wedding, Shen took over Winston’s position as a Red Pole, seeking vengeance against Dogeyes and resisting Big Smile Lee’s hostile takeover of the Water Street Gang’s assets.

Realizing his growing charisma and capability within the triads, Shen was approached by Broken Nose Jiang who enlisted his aid for their mutual interests against their common enemy, Big Smile Lee. Soon after, Shen, Jackie and the Water Street Gang were officially initiated into the Sun On Yee, however Raymond would express increasing skepticism of Shen’s chances of success and his objectivity.

While recovering in hospital, Uncle Po appointed Two Chin Tsao as temporary chairman of the Sun On Yee until his recovery. Shen proceeded to work for Sonny Wo in order to gain more information of Big Smile Lee’s activities and to hinder his chances of becoming chairman. Uncle Po eventually passed away in intensive care and Jackie was caught and arrested during a heist.

After stealing Ricky Wong's portable data disk, Shen met with Pendrew revealing incriminating evidence on Sonny that would damage Big Smile Lee’s operations and business income. Shen negotiated with Pendrew the release of Jackie in exchange for the evidence, but was ordered by Pendrew to cease his undercover work and warned to stay away from the triads. Shen however realized that the future of the triads and HKPD would be in jeopardy if Big Smile Lee could become the next chairman.

Shen attended Uncle Po’s funeral  with his fellow Red Poles and Jackie, during which Sonny was arrested by Pendrew. To make matters worse, Pendrew betrayed Shen by leaving him and the Red Poles to be slaughtered by 18K Triad. After surviving the ambush, Big Smile Lee demanded the leadership of the Sun On Yee, however Shen supported Jiang and Pockmark Cheuk's decision to hold an election to uphold the triad’s stability and traditions. After the funeral, Big Smile Lee immediately retaliated by sending his forces against the Water Street Gang to kill Shen in order to eliminate his competition and votes against him. Shen defended both his own territory, protected and secured Ricky’s support and rescued Jackie from the 18K.

However, much later on the eve of the election, Shen was lured out of hiding and found Jackie’s mutilated and tortured corpse. Caught off guard, Shen was ambushed was taken to Mr. Tong, who had learned of Shen’s true status as an undercover cop and proceeded to brutally torture him and extract a confession against Jiang. Tong cut up Wei's abdomen with a scalpel, broke one of his toes with a hammer, and drilled into his thigh. In spite of this, Shen managed to escape, fight his way through of a number of Lee's thugs, and kill Tong in a fistfight. Shen then broke out of the penthouse he was held in, stole Tong's car, and drove off to Big Smile Lee's compound. After slaughtering dozens of Big Smile Lee’s men, a badly-injured Shen engaged in a fistfight with Lee and managed to kill him, finally bringing the long civil war to a violent conclusion.

Shen was placed in Raymond’s protective custody and learned that Pendrew had received a promotion to Interpol for arresting Sonny. However despite his corruption, Pendrew was now untouchable with his new status. Days later, Shen received an envelope from Jiang, surprisingly addressing him as “Officer Shen”. The envelope contained a portable data disk showing video footage of Pendrew murdering Uncle Po in hospital, giving Shen proof of Pendrew’s corruption, conspiracy and murder.

Shen visited Pendrew in custody where Pendrew explained that he betrayed Shen because he didn’t trust him for getting personally too close to the triads, hence he was meant to die at Big Smile Lee’s hands for being an undercover cop. Shen revealed that all the triad prisoners were informed of Uncle Po’s murder. The two of them knew well enough that Pendrew would die in prison at the hands of the vengeful inmates, leaving Shen satisfied in spite of Pendrew's protests.

Shen finally met with Inspector Teng, thanking her for her help in closing the case. Despite being an undercover officer, Jiang ordered the Sun On Yee to leave Shen be since his actions were loyal and benefited her. Shen was now free to resume his life as a cop in Hong Kong.

As the main protagonist, he appears in every mission, every side mission and every favor.

"Being raised in both Hong Kong and America has given Shen an immense familiarity and understanding of both cultures, hence is able to interact with and infiltrate gangs with excellent natural ability. Because Shen moved to the United States as an adolescent and has never had a strong father figure or male role-model, his sense of identity and self is more capable to adapt and influence giving him with certain "chameleon-like" tendencies that serve him well when infiltrating a criminal organization.

However due to prolonged stress of undercover work and Shen's own personal tendencies, his superiors suspected that his allegiance to the police force was easily capable of changing. As a result, Shen was often a subject of intense psychological reviewing and internal affairs investigations. Furthermore it was believed that Shen was motivated into becoming an officer by vengeance against the triads for the death of his sister, hence he was also viewed as a risk factor and unsuitable for undercover work.

Shen is a highly intelligent, self-aware and generally balanced individual. While undercover Shen possesses a strong emotional fortitude against prolonged and extreme periods of stress and exhaustion, however he does have a disposition for using excessive violence and can be greatly motivated by personal vendettas. Shen has a clear understanding of the risks involved in long-term undercover work and is driven by a strong moral system and sense of loyalty, not only to the police force and duty, but to his friends, some of which are triads, and family."

Wei Shen with Sandra and Vivienne 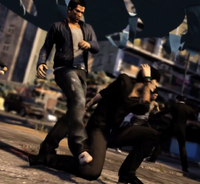 Wei, Jackie, and other gang members got arrested

Wei with Pendrew and Raymond

Wei rips an enemy's head off

Wei about to do an Environmental Attack 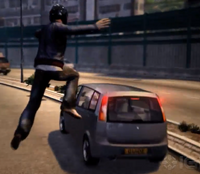 Wei gunning down enemies in a motorcycle 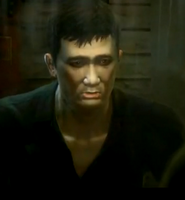 Wei when the game was still known as True Crime: Hong Kong, and published by Activision.

Wei, Raymond and Pendrew, when the game was still known as True Crime: Hong Kong. 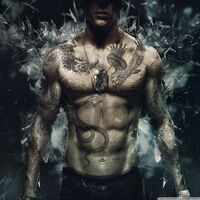 Wei talking with Ming, when the game was still known as True Crime: Hong Kong.

Wei in the "True Crime: Hong Kong" version of the mission: "Loose Ends".

Wei's design when the game was True Crime Hong Kong

A view of the full Dragon tattoo on Wei's arm 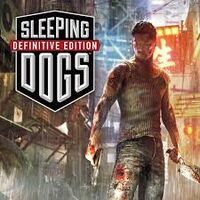