Vivienne Lu is a character in Sleeping Dogs. She is in a relationship with Ricky Wong.

Vivienne is a known celebrity in Hong Kong. She is a client of Sonny Wo, who owns Three Circles Entertainment. With Sonny's media and entertainment industry connections, Vivienne established herself as a renowned singer and actress, producing popular songs like Fly and Yellow Fever.

However, due to Sonny's connections to the Sun On Yee triad, specifically in drug and prostitution rackets with Big Smile Lee, Vivienne was often exploited by Sonny who forced her to sleep with his clients and business associates. During one encounter, Vivienne slept with Sonny's right-hand man and gangster, Ricky Wong. The two fell in love and pursued a relationship, however Sonny's callous treatment of Vivienne created a strain on their relationship.

Spoiler Warning: Plot details follow, read at your own risk.

While a new associate, King, was in Hong Kong to produce her new song, Vivienne went shopping with her friend, Sandra. Instead of being picked up by Ricky, who was preoccupied with Sonny, Wei Shen arrived instead. At Sandra's suggestion, Wei took them to a street race, mostly impressing Sandra. Sonny later sent Vivienne to sleep with Wei. Vivienne attempted to seduce Wei, but to her surprise and confusion, he turned down her advances. Nonetheless, Vivienne was grateful and confided in Wei her fears that Sonny was planning to kill her.

As the civil war in the Sun On Yee escalated, Wei approached Ricky and Vivienne to gain Ricky's support against Big Smile Lee. However Ricky was under the impression that Wei slept with Vivienne, hence outright refused to help Wei, but Vivienne defended Wei, revealing that he turned down the opportunity to sleep with her. Vivienne further explained that the police had incriminating footage of her that could damage her reputation unless she agreed to testify against the now imprisoned Sonny. To protect her career, Wei told Vivienne to testify. However, these would prompt Big Smile Lee to kill Vivienne in retaliation, hence Wei convinced Ricky to stop supporting Big Smile Lee in order to protect Vivienne.

With Big Smile Lee later killed by Wei, it is unknown if Vivienne testified against Sonny. While doing so would free her from Sonny's control, it would also put herself and Ricky in an awkward situation with the Triads. But with Jiang in control of the Sun On Yee, it may have been allowed due to Jiang's disdain for Sonny and his businesses. However the case may have been dismissed altogether after Pendrew himself was incarcerated. 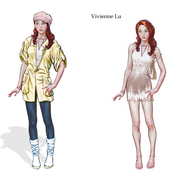