Vehicles are a feature in Sleeping Dogs. There are over 75 different vehicles ranging from motorbikes, cars and boats. Land vehicles are stored within parking garages and organized into classes, so long as they are purchased at a car dealer, or unlocked as a reward for meeting certain criteria, as stolen vehicles cannot be stored. They can also be delivered via Car valet, which is unlocked after achieving Face Level 4. Tire irons can be found in the trunk of a number of cars. A pump action shotgun is stored in the Police Car and Police/SWAT SUV, which can be obtained by unlocking the Police Trunk Key Police XP upgrade.

Sleeping Dogs has a surprisingly huge variety of marine transport:

A front and side view of the Blast

A front and side view of the Executive

Front view of the Drifter GT 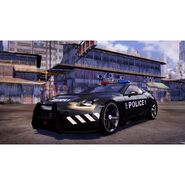 DLC presentation of the SWAT Cruiser