Start a Wiki
Spoiler Warning: Plot details follow, read at your own risk.

"That's the attitude that makes us strong. Loyalty, discretion, used to be more common."
―Uncle Po to Wei Shen

David Wa-Lin "Uncle" Po is a character in Sleeping Dogs. He was the dragon head and chairman of the Triad organization, Sun On Yee from 1981 until his death in 2012.

David Wa-Lin Po had been a member of the Sun On Yee for many years, eventually been made a Red Pole in the triad and becoming a candidate for the position of chairman by 1981. Due to police operations led by Thomas Pendrew, several triad gangsters were killed, such as Big Fish Chu, Wilson “No Cash” Wang, and Fat Sammy Zhang. Po aided this operation to get rid of his competition. Later the two struck another deal: Po would sell out the "Three Tigers", the leaders of the Sun On Yee, to Pendrew to be arrested. This would allow Po ascension to the position of Chairman and immunity for himself and Sonny Wo, a business partner and triad associate. Pendrew successfully arrested the Three Tigers, which earned him recognition and a career advancement from Interpol who promoted Pendrew to Superintendent.

To honour his agreement and to avoid giving Pendrew leverage against him, Po became reclusive and would maintain a good image by focusing on charitable causes and business agendas. Po would avoid the use of violence whenever possible but he would murder in secrecy if needed. By 2010, Po's most powerful and trusted red poles were Pockmark Cheuk, Big Smile Lee, Broken Nose Jiang and Two Chin Tsao, all of them were likely candidates to be his successor. Po held the position of chairman for over thirty years, and was still greatly feared and respected and his leadership remained unchallenged.

However, a power struggle in the Sun On Yee was instigated by Big Smile Lee, who ultimately planned to become the next chairman in the resulting civil war. Territorial disputes between the Water Street Gang and Jade Gang escalated to the point that Winston Chu, leader of the former, attacked Dogeyes's drug-manufacturing warehouse in retaliation, kidnapping Siu Wah.

Winston and Wei Shen met with Uncle Po to answer for their transgression, though Po was seemingly impressed and taken by Shen's ability and loyalty to Winston. Po even showed leniency to Winston, for keeping Siu Wah alive and understanding that Dogeyes provoked and incited the fight in the first place. As a peace offering and act of good faith, Winston gave him Siu Wah and his cut of his drug operations.

Po later attended Winston and Peggy Li's wedding as the guest of honour and even showed an interest in Mrs. Chu. However, when Wei was getting Po's favourite wine out of the trunk of Winston's car, the wedding was attacked by the Jade Gang, who were disguised as both the catering staff and the 18K Triad, during which Winston and Peggy were murdered and Po himself was seriously injured. Po was protected and rescued by Shen who escorted him to the hospital while fending off the 18K's attacks. However, Mrs. Chu later learned from Johnny Ratface, who she had Wei kidnap for leading the attack, that Dogeyes planned the attack. Wei hunted down Dogeyes, and along with the help of Duke, was handed over to Mrs. Chu, who murdered him with a meat cleaver.

"You must stop this fight at once! We must be united against our true enemies!"
―Uncle Po

Po spent the next few days in intensive care, recovering from his injuries, during which he was visited by his lieutenants and Shen. Unable to lead the Sun On Yee in his weakened state, Po explained his intent to appoint a temporary chairman until a formal election can be held. At first, Po offered the position to Pockmark Cheuk, who had proven himself to be a trusted adviser and friend, but Pockmark humbly and respectfully declined. Big Smile Lee attempted to take position instead, but was interrupted by Broken Nose Jiang who nominated Two Chin Tsao since he is Po's nephew and family by blood. Two Chin accepted, however it was clear to Po that there was tension and disputes between the Red Poles, to which Po warned and ordered them to stop fighting amongst each other and be united against their true enemies.

"Pockmark, see to it that Wei is formally initiated. He's been a loyal footsoldier to the Sun On Yee. It's time to make him a red pole."
―Uncle Po

The 18K again attempted to assassinate Po, this time by attacking the hospital directly and disengaging the electricity powering Po's life-support system. Wei and Ricky Wong arrived on time, restored power, and successfully fought off the 18K, keeping Po safe long enough for the HKPD police to arrive and take control of the situation.

"The only difference between you and me is... I know... what I am..."
―Uncle Po's final words to Pendrew before his death

Po was later visited by Thomas Pendrew himself, revealing that he planned to silence Po and arrest Sonny Wo to advance his career. Pendrew betrayed Po, injected lethal chemicals into his IV, and watched him die. With Po's death, the civil war within the Sun On Yee escalated but was ultimately resolved with the death of Big Smile Lee, allowing Jiang to take control. Furthermore, Jiang obtained video footage of Pendrew murdering Po, and passed it onto Shen. This allowed Shen to arrest and imprison Pendrew for conspiracy, murder, and in retribution for his betrayals. Shen also informed the inmates of Uncle Po's murder so that Pendrew would be mercilessly beaten by them.

Events of Nightmare in North Point

Although Uncle Po was not seen, he was briefly mentioned to Wei by Vincent and Ponytail regarding the circumstances on Big Scar Wu. It's explained that Wu was a ruthless member of the Sun On Yee, and that his actions were too dangerous even for himself. So to make things easier for eveyone, Uncle Po sent three Sun On Yee enforcers (one of them being Ponytail) to kill him, which they did. But before grinding up Wu's body, Uncle Po told Ponytail to keep his pinky finger so that he'll never get any rest in the afterlife.

Although it is believed that Po started in the Sun On Yee with a violent history, since becoming Chairman, Po develops a benign and grandfatherly image. He commits money and time to charities and is well known as a benefactor in the neighbourhoods that Sun On Yee control. Overall he is a reasonable businessman, negotiator, philosopher, peacekeeper and working as the brains of the triad. Po is a moral and idealistic man evident by his appreciation of the values of family, tradition, loyalty and honour. Despite his soft demeanor, Po is not to be underestimated, he uses violence and murder when necessary and remains greatly feared and respected. Po is also the game's oldest character at the age of 76-77 (depends if his birthday takes place before or after the events of the game)

Uncle Po believes in giving credit where credit is due to the point he does not allow modest people to downplay their worth and ensures they are rewarded.

Wei protecting Uncle Po after he was shot at Winston's wedding.

The Sun On Yee leaders at Uncle Po's funeral. 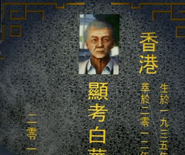 Uncle Po about to be assassinated by Pendrew.

Uncle Po's death after being removed from life support by Thomas Pendrew
Add a photo to this gallery
Retrieved from "https://sleepingdogs.fandom.com/wiki/Uncle_Po?oldid=30888"
Community content is available under CC-BY-SA unless otherwise noted.