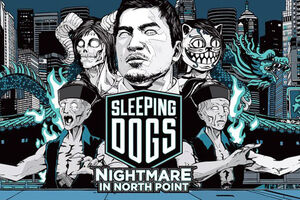 The Nightmare in North Point is a DLC for Sleeping Dogs. It is a new horror-themed game mode. The DLC was released October 30th, 2012.

In life, Big Scar Wu was one of Hong Kong’s most ruthless triad gangsters. Feared as much by those who stood against him as those who stood by him in the Sun On Yee, it was decided by the Grand Dragon that he must be stopped. Looking to send a message, they had him stabbed 42 times before feeding his bleeding corpse to the grinder at the Smiley Cat cat food plant… his final resting place, in the food bowls of the city’s pet cats. It is said that if the wronged receive anything less than a proper burial, their spirit will almost certainly come back as a Hungry Ghost, damned to starve in the afterlife, feeding only on their hatred. You turn him into cat food and that’s pretty much guaranteed.

Now, Hell has a sense of humour, and when Big Scar Wu arrived in the underworld and word spread of his demise, they renamed him Smiley Cat, much to his chagrin, with the name fuelling his bitterness with every utterance and driving his thirst for revenge. Rising from Hell and vowing to exact his revenge, Smiley Cat has raised an army of Jiang Shi, vowing to destroy the Sun On Yee and to create Hong Kong’s most fearsome criminal empire.

With the city in chaos and its citizens possessed, Wei Shen now faces a challenge far more sinister than any before. To save Hong Kong, he must seek out the most powerful of Chinese magic, endowing him with a power strong enough to take on Smiley Cat’s army of Jiang Shi and face-off against the ghosts of Triads he has defeated in the past, sending the dead back to Hell once and for all.

After a late night movie, Wei's girlfriend, Not Ping, is suddenly abducted by the ghost of Smiley Cat, who has risen up from the Underworld to take his vengeance on the Sun On Yee. Smiley Cat was formerly Big Scar Wu, a gangster that was ordered to be killed by Uncle Po for his recklessness. His posthumous name, which he despises, was acquired when his corpse was ground up into the namesake brand of cat food. He has raised an army of Jiang Shi to help carry out this task, as well as possessed members of the 18k. When Wei finds his fighting skills have no effect on the spirits, an apothecary brews a special tea for him that imbues his moves with the magic necessary to defeat them.

Smiley Cat summons the ghosts of Dogeyes, Johnny Ratface and Ponytail, a lieutenant of Big Smile Lee that carried out Wu's execution. Wei defeats each one of them and sends them back to the underworld, but not before Ponytail tells Wei how to defeat Smiley Cat: he must burn Wu's pinky finger, the last remnant of his original body.

Wei manages to fend off the hell-spawn and incinerate the finger, sending Smiley Cat back to the underworld and freeing Not Ping. They then head over to Vincent's grave and leave a bowl of noodles on it (as thanks for helping out with Smiley Cat). However as the two leave the cemetery, a final shot shows that Not Ping is possessed and the scene fades to black with Smiley Cat's laughter.