Hong Kong (香港) is the setting of Sleeping Dogs. The city is not geographically mapped, but tuned for gameplay, as its purpose is for gamers to enjoy a living playground and opportunities for fighting, driving and shooting.

Even though it's not what it looks like. Hong Kong is in south China next to Guangdong Province, next to the city Shenzhen.

Hong Kong is a big island, in reference to the real Hong Kong. There is a big part for boat racing missions. The city is also very dense and heavily crowded (which makes free running sequences come to life). There are many ways to spend time in Hong Kong. Some activities include: shopping, buying improvements for safehouses, visiting gambling dens, watching cockfights, going to massage parlours and doing karaoke.

The in-game map of Hong Kong. 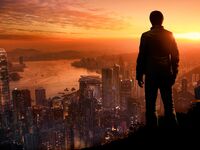